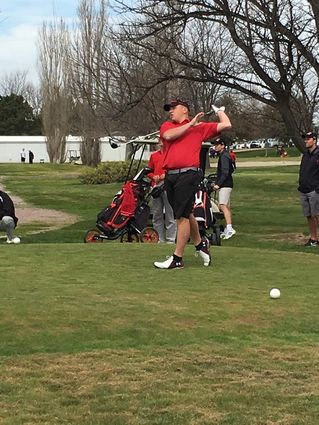 Dillion Wise displays his form at a tournament earlier this season in Mitchell. Wise closed out his high school career at the state tournament in Kearney.

The 2019 Nebraska Boy's State Golf Tournament did not play out as planned thanks to some nasty weather that cancelled out the two day format, limiting it to just one day and 18 holes of play.

The Class C State Tournament was held at the Meadow Lark Hills Golf Course in Kearney and the Kimball High team went down early hoping to get in some practice rounds to prepare them for tournament play, but again thanks to the weather, coach Chad Wise said "We were only able to get in 6 holes of practice, and that was in the cold and wind and rain." A lot of time was spent in the motel rooms, hoping fo...