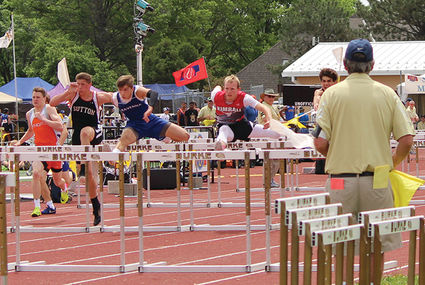 Kimball's Brady Kilgore, right, and Ravenna's Jack Drahota, center, are practically dead-even over this stack of hurdles during the Class C 110 meter hurdle finals at Omaha Burke Stadium. Kilgore won in a photo finish, clocking 14.79, with Darhota in second at 14.80.

A memorable last track meet for Brady Kilgore as he closed out his Kimball High School athletic career at the Nebraska State Track and Field Championships at Omaha Burke Stadium. The recent Kimball High grad brought home medals in all three of the events he qualified in, including the Class C gold medal in the 110 meter high hurdles! The talented young man who has accepted a track scholarship to run for the Eagles at Chadron State next year, won the hurdle event in a photo finish with his time clocked at 14.79 and Jack Drahota of Ravenna was timed 2nd in 14.80. Kilgore went through his senior season winning the 110 high hurdles in every race ran!

As already mentioned, Brady also brought home hardware in two other events placing 6th in the 300 hurdles with his time of 41.56, and earned the 7th place medal in the high jump clearing 6'0". By virtue of his outstanding 2019 State Track Meet, he becomes one of the few who can boast of bringing home three medals from the state meet, and let's not forget, that includes the gold in the 110 meter highs! 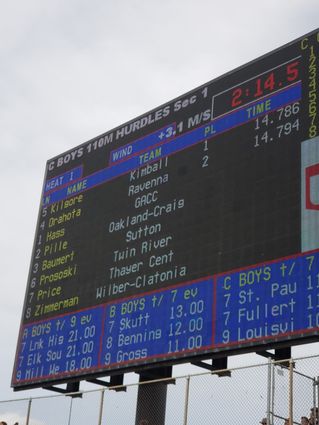 Stephanie Kitchens For The Observer

The official score clock at Omaha Stadium tells the story of just how close the Class C Boy's 110 meter hurdle race was with Kimball's Brady Kilgore winning over Drahota of Ravenna in a photo finish.

Brady had a traveling partner and roommate in senior Corey Travis who made his first trip to the state met as a competitor, qualifying in the shot put. Corey gave a solid effort at Omaha finishing 19th in Class C with his best heave of 42'2.25".

These two young men will spend quite a bit of time together this summer as both have been hired to work in the maintenance of the Four Winds Golf Course. They will both be missed next year for their athletic abilities as well as in all of their school activities.

Deven Sullivan gave Banner County High fans something to be proud of with his times at the State Track Meet. The talented young junior was a two event long distance state qualifier and although he didn't medal in the top 8, he ran excellent times. Deven ran 12th in the 3200 meter run on Friday with a time of 10:53.88, and came back Saturday in the Class D 1600 to run 11th with his time of 4:49.87.