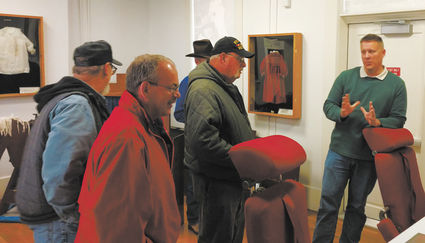 Kimball County veterans get a first-hand chance to see what memories are held at the Warren ICBM & Heritage Museum on the F.E. Warren Air Force Base. From left to right, Mike Beatty, Mayor Keith Prunty and Don Olson listen to Glenn Robertson while he explains museum displays. Below is a display from earlier days at the base, which was established as Fort D.A. Russell in 1867.

"A small way to give back to our local veterans," sKimball Mayor Keith Prunty said many times in the past few months.

Prunty also said it countless times during the Francis E. Warren Air Force Base tour this past Monday that he and others set in place for local veterans.

A crips morning was set for vets to have the opportunity to travel to Cheyenne aboard the Kimball County Transit Bus to the base.

First on the activities list after meeting the tour guide for the day, Glenn Robertson, was a tour of the Warren ICBM & Heritage Museum on base. The museum consists of many time period displays along with a rich history of the area and the base itself.

The group learned that before the name change to F.E. Warren AFB, the base was originally established as Fort D.A. Russell for workers during construction of the western link of the transcontinental railroad in 1867. The name was first changed to Fort Warren.

After the Air Force took command in the fort, it was renamed once again to F.E. Warren AFB.

The museum is a time capsule within itself, holding many different display items from honored and remembered solider uniforms to decommissioned missile parts.

A true piece of American history, the museum is open to the public despite being on base, but an advanced contact for security measures is needed.

Next was the Missiles Procedure Trainer tour, a building no electronics were allowed in for security reasons. An introduction to missiles and a demonstration to the first stage of missile launch was shown before two volunteers from the group were asked to proceed in the first steps to launch a missile (training of course).

Local veterans Don Olson and John (Mike) Beatty were seated in two chairs that locked in place. After strapping into their safety harnesses, both men were given detailed instructions to initiate the first stage. It took a couple times to complete the task at the same time, but it was accomplished.

Once the first stage was complete, the group loaded the bus and was in full swing of the base tour. It was a driving tour that included the showings of multiple homes belonging to high ranking officers, generals and commanders and the cemetery. 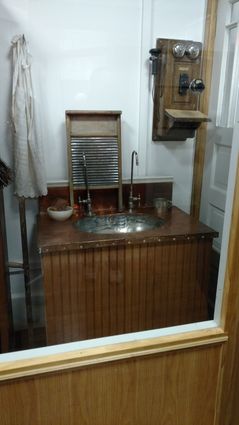 Other buildings and homes, some of which are included in the 200-plus buildings on the Warren AFB, are on the National Register of Historic Places.

A still shot in time, a piece of history and a glimpse in a memory are only slivers of the cherished history that remain at F.E. Warren.

With loads of excitement, Prunty can not wait to offer this opportunity to more local veterans in the future with plans to make this an annual event.

"It was a great time, and a big shout out to Christy Warner and the Kimball County Transit for allowing the use of their bus to take the veterans to Warren," he added.