From Dix To Vietnam

Army 2nd Lt. Stanley A. Belgum Did It His Way 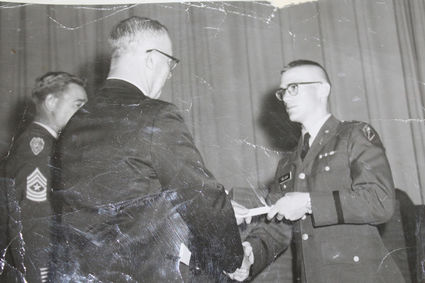 Kimball County native Stanley A. Belgum was commissioned in 1968 as a second lieutenant in the Army. Below: He holds his medals in 2019. They include a Bronze Star with a "V" on it for Vietnam, National Defense Service Medal, Vietnam Service Medal and Vietnam Campaign Medal. Stan was drafted and served in Vietnam from early 1968 until February 1969.

The year, 1968. The country, this country, was deep in political upheaval, assassinations, drugs and demonstrations.

Lyndon B. Johnson was President, Martin Luther King and Robert Kennedy were assassinated, and the Viet Cong made a valiant attempt at defeating the Americans in the Tet Offensive. America was fighting an unpopular war, but a young man from Dix, Neb., was drafted into the Army and served his country with patriotism, valor and bravery.

Stan Belgum graduated from Dix High School in 1965 and by 1968 he was a second lieutenant in the Army. Shortly thereafter, he was the recipien...