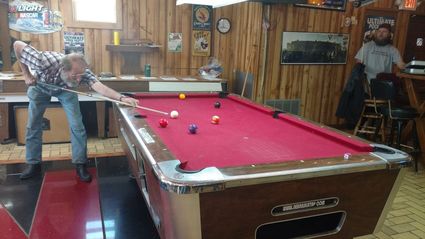 Richard Kaczmarek takes a shot during his first game of the tournament held at both Beer and Loathing and Chute #7 on Saturday, April 27. Kaczmarek finished third.

The first of a four pool tournament series concluded late Saturday night, April 27. It was a benefit for Cindy Warren, who is formerly of Kimball.

With entry fee money and donations from both Chute #7 and Beer and Loathing, nearly $1,000 was raised. Warren was also at the tournament with many family members, and she expressed many thanks to those who helped put it on as well as who donated and came to play.

"We had a great turnout. It was nice to see so many people come to support Cindy," said Heather Entingh, owner of Beer and Loathing.

It was a evening full of friends, fun and a reminder...