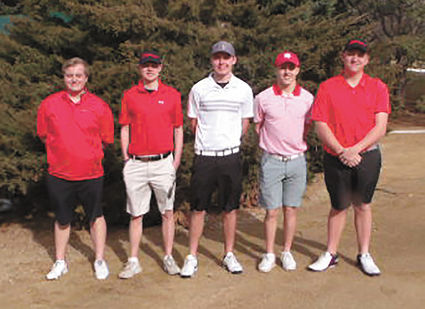 The Kimball high boys golf team got the season underway at the Mitchell Invitational Tournament on April 9 and finished third in the team standings with two individuals medal winners.

Drake DeMasters of Bridgeport took medalist honors with his round of 76 to edge Crayton Cyza, who also shot 76, of Alliance in a one hole playoff.

Kimball’s Dillon Wise took third place honors with his round of 78. The talented senior had a shaky start with a triple and double on the first two holes to go 6 over, but then shot just 1 over on the final 16 holes to earn his third place medal.

Zane Anthony also made the top 10 medal group, shooting 83 to finish No. 10, the same score as the ninth place round by Jaron Matulka of Alliance.

Izaac Reuter was just three strokes out of the top 10 medal group with his round of 86. Cole Henton shot 98 and Jess Sirren 104 to round out Kimball scoring.

Coach Chad Wise said of his team’s opening tournament play: “We played alright. We looked rusty with our play. I wish we could be more consistent, but that will come.”

Wise went on to say, “Dillon played the last 16 holes well after a triple-double start. Zane’s putting was off but he was hitting the ball well.”

With so many cancellations and postponements, the Longhorns got in another day of tournament play this past Tuesday at Morrill.

They get busy this coming week playing at the Scottsbluff Country Club on Monday, April 22, at Bridgeport on Wednesday, April 24, at Chase County in the SPVA Tournament on Friday, April 26, and at Bayard on Saturday, April 27, for the WTC Conference Tournament.