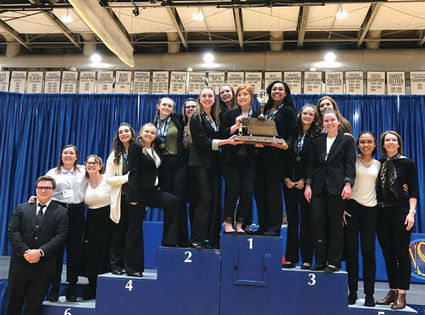 Members of the Potter-Dix Speech team receive their state championship award this past Friday, March 22, in Kearney at the state competition. Despite few practice opportunities, the team was able to finish the year strong.

They endured a rocky start to this year's speech season, but the Coyotes overcame many struggles.

According to Potter-Dix head speech coach Chandell Oleson, "The year started out rough and scary because of illnesses and snow days. We weren't getting the practice times that we needed. We were nervous. We usually have three or four Saturday practices with the whole team, but this year we had only one Saturday practice."

Coach Oleson just completed her third year as head speech coach at Potter-Dix and now has a state championship under her belt. Oleson was assisted by Kristin Kasten and Morgan Boots. Both assistances were a huge asset to the team, Oleson said.

The Potter-Dix Coyotes headed to state speech in Kearney on Thursday, March 21, and participated on Friday. By Friday evening, the 13 qualifiers would hold up the D2 State Championship team trophy.

"We (the coaches) were so excited that we were taking the whole team, we weren't leaving anyone home," Oleson said. "That is the hardest, when someone has to stay home because they didn't qualify."

While at state, eight students made finals in six different events.

Placing second was the duet acting team of CC George and Ana Manning. In third place for duet acting were Erica Bogert and Reagan Williams.

Workhorse Ginny Herboldsheimer received fourth in Extemporaneous Speaking and fifth in Persuasive.She was also part of the OID team. She had to perform nine different times at state.

Michaela Rotert placed sixth in Informative Speaking and commented: "It has been wonderful to have been a state finalist all four years of high school, and to have been team state champions two of the four years. Speech is a lifelong skill that will continue to benefit me."

Oleson praised the support that they received from the communities. Not only was public speech night a huge success, but the Potter Fire Department escorted them out of town on Thursday and "brought us home" Friday night.

Potter-Dix has claimed runner-up or championship honors 12 times since 1981, in D, D1 or D2. Seven seniors from the team of 13 will graduate this May.