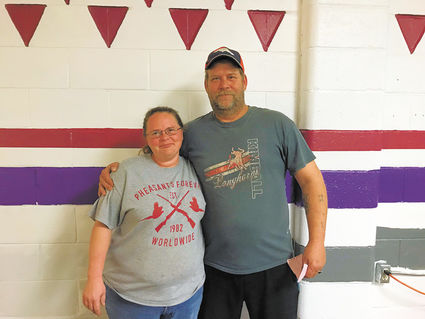 A Kimball man is on a hot streak after the first weekend of the Kimball Hospital Foundation 9 pin no-tap bowling tournament.

Henry Barker sits atop the leader board after rolling a perfect 900 series Saturday night at the KimBowl, scoring three consecutive 300 games to land in first place in men's singles competition. Barker, who carries a 216 average, was able to add 9 handicap pins to score a 909 series. He currently leads Greg McDaniel of Kimball, who rolled two 300 games Saturday and now sits in second place in men's singles with an 875 series.

In the 9-pin no-tap format, any bowler who knocks down nine or more pins on his or her first ball is awarded a strike. No-tap bowling is often used to help less talented individuals bowl with more talented bowlers on a level playing field. The tournament features league and non-league divisions for men's and women's singles and mixed doubles.

"We had a fun first weekend and hope to see more folks join us next weekend," said Kerry Ferguson, director of the Kimball Hospital Foundation. "People really like the 9 pin no-tap format and it's open to league and non-league bowlers of all ages and abilities."

Two Scottsbluff women lead the adult league doubles division with a 1636 series. Angel Bering and Monica Garcia lead Brandon Barker and Cecilia Biberos, both of Kimball, who scored a 1589 and Paul and Mary Parsons of Cheyenne, who sit in third with 1536.

This year's tournament features a new prize format, not only awarding cash prizes on a 1 of 6 ratio, but adding a $50 bonus cash award for the high scoring man and woman in each of 10 sessions.

All players who score a perfect 300 game will be entered in a drawing for $100 in pro shop merchandise, sponsored by KimBowl.

The tournament is a fundraiser to help the Foundation purchase a new nurse call system for Kimball Health Services. It resumes this Saturday at 1, 3:30 and 6 p.m. and Sunday at 1 and 3 p.m.