Sub-District Semifinals The End For Longhorns 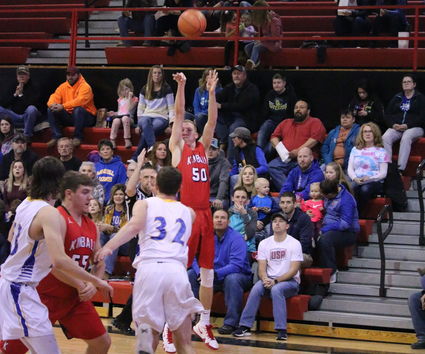 Beau Hanks was the only Longhorn in double figures, scoring 12, in Kimball's Sub-District season-ender against the respected Bridgeport boys. He also grabbed six rebounds. He takes this shot earlier in the tourney.

The Kimball High boys saw their basketball season come to a close with a 55-39 loss to top-seeded Bridgeport in semifinal play of the tournament held at the Scottsbluff High School this past week.

With the loss, Kimball's season goes into the books at 7 wins and 14 losses.

It was the third meeting of the season between the two teams. The Horns gave the highly touted Bulldogs a scare early, but faltered down the stretch.

In this final meeting, Kimball trailed 14-10 at the quarter break and were down 25-21 at halftime, but a disastrous third period in which the Horns were outscored 18-7...