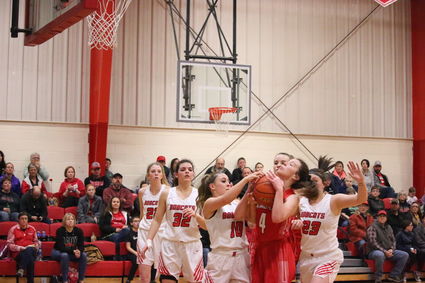 Kimball's Sydney Biesecker (4) is outnumbered, but that doesn't stop her from pulling in a rebound during the win over Hemingford that enabled the Horns to finish 10-10 on the regular season.

A second half rally gave the Kimball High girls a 52-44 come-from-behind win at Hemingford Friday night as they closed out the regular basketball season with a 10 win-10 loss season, and gave them some momentum as they headed into sub-district tournament play this week.

The two teams battled even in the first period and were tied at 14-14 going into second quarter play, but the Lady Bobcats won the second quarter of play to lead 26-18 at halftime. The Lady Horns closed the margin to 34-28 by the end of the 3rd period, and then outscored the host team 24-1O in the final period for the victo...