By Dakota Kuhns
Roughin It

Wild Horse Rights And The Story Of Frank Robbins 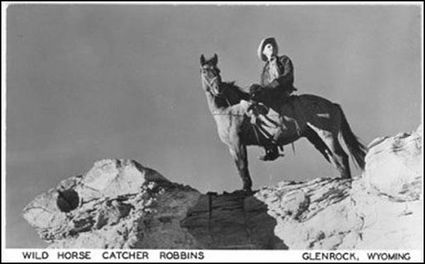 For nearly a century, the U.S. Government, American Wild Horse Campaign, and many others have fought for and against the rights of wild horses roaming the Red Desert of Wyoming. A Wyoming Federal Court ruled against the Bureau of Land Management (BLM) in court earlier this month, Jan. 10, 2019.

The American Wild Horse Campaign (AWHC) was handed a win in a lawsuit to put a stop to the BLM illegally rounding up hundreds of wild horses in southwestern Wyoming, according to a press release from the AWHC earlier last week.

The AWHC has led this battle of many years against the BLM's plan to eradicate wild horses from a 2 million-acre area of public and private land known as the "Wyoming Checkerboard" at the request of the Rock Springs Grazing Association (RSGA).

According to a release by Basin Radio Network earlier last week, the suit charged the BLM with violations of three federal laws by rounding up hundreds more horses than disclosed. The numbers were also excluding foals and weanlings from official counts.

As anyone in agriculture knows, a population size impacts the outcome of everything and everyone involved for the good and the bad.

The fight for and against wild horses in the United States will continue as it has for many years. Nearly 76 years ago on March 16, 1943, the U.S. Grazing Service, (today's BLM) announced there were about 100,000 wild horses roaming federal ranges. Shortly after the announcement, it was decided to stop the growth and enlargement of the wild herds.

Once the decision was made, a widely attended meeting was held in Rock Springs, Wyoming, to create a plan of action. It seemed the meeting was composed around the destruction, and the wholesale slaughter of "trespass horses" (horses not under grazing permits).

A Wyoming native, Frank "Wild Horse" Robbins, was one of the many in attendance at the meeting. Robbins, a rancher and cowboy in his own right, was also assigned to break horses for the Army during World War I for the Remount Service. After the Army and a few cross country moves, Robbins decided to return home to Glenrock, Wyoming, to capture wild horses off of Wyoming's Red Desert in 1935. Robbins was the youngest of six boys and one girl born to Frank Benjamin and Susie Robbins on Box Elder Creek near Glenrock.

During the meeting, Robbins presented a plan, "I'm representing the horses. I'll trap 'em and bring 'em in alive." The plan included the use of a small airplane to gather the herds into "horse traps," which were somewhat like corrals. The method worked. Robbins captured thousands of horses that were then broke and sold as either rodeo stock or hauled by truck to Wamsutter. Then they were put on a train and sent to Europe to supply meat during WWII.

However, out of the estimated tens of thousand horses Robbins captured, one wild stallion with a photo and a name seen and heard all across the world was the ticket to fame for the wild horse population in Wyoming -- Desert Dust, a beautiful palomino stallion that called the Red Desert home.

According to the Wyoming Cowboy Hall of Fame and relative Dale Robbins, Frank told the Casper Star Tribune and a Glenrock Independent freelance reporter that he and his hands were gathering horses some 28 miles southwest of Wamsutter when he was approached by a couple who passed along the message that they were on to "something special." After hearing the news, Robbins called on his pilot, Walt Williams of Laramie, to take a closer look.

July 12, 1945, brought a morning of remembrance for the Robbins family as well as the rest of the crew, an experience that explained what "special" really was. That day Williams was able to run the stallion into the box canyon where Robbins and his hands completed the capture.

As the dust settled, Robbins sent word to photographer Vern Wood of Rawlins "to come out and capture the wild palomino on film." It was reported that Robbins gave him the name, "Desert Dust."

An annual July 4 event in Glenrock was the the "Robbins Wild Horse Rodeo." Dozens of cowboys strapped on their spurs and saddled the wild mustangs from Robbins' roundup to try their hand at the grand prize year after year. However, the 1946 rodeo was a "special" event for spectators and cowboys alike. Desert Dust made his debut, which of course attracted representatives of Universal Pictures to shoot their upcoming film, "Fight of the Wild Stallions," the 1947 Movie.

Shortly after the rodeo, the film crew was able to catch Robbins' method of capture first hand and on camera to also use in the film. The movie made its world premier in Casper and was shown in theaters around the country, and reportedly viewed by nearly 50 million people. The film was also nominated for a 1947 Academy Award.

The photograph of the stallion was run in The Denver Post, the article from the Post was picked up nationwide by United Press and the famous black and white photo was used by Robbins to promote his rodeo held every year in Glenrock.

Once the photo appeared in the Post, numerous inquiries of the print came in, including those from National Geographic, Western Natural Life and Eastman Kodak, who all received prints of the beauty. In 1946, Wood's announced that a large 40- by 50-inch color oil print of Desert Dust would be hung in the Capitol Building in Cheyenne, and a second was given to Senator Joseph C. O'Mahoney for presentation to the National Capitol.

Desert Dust was murdered in 1952 and his killer was never caught. However, the family believes to this day that the murder of the beauty was part of a feud between a man from Glenrock and Robbins – and that they did not see eye to eye.

Here's Wild Horse Robbins on the same big roan horse that he rode in the 1947 film "Fight of the Wild Stallions."

But the spirit of the stunning Palomino remains around the small towns in Wyoming near Wamsutter. A painting hangs in the bar at the Virginian Hotel in Medicine Bow, and a photo is on its restaurant menus. A large mural also in on the roadside in Rawlins on the old Ferguson building on Main Street; it's a view of the big yellow beauty can also be seen in the movie.

Frank "Wild Horse" Robbins passed away on July 5, 1984, at the age of 89. and was inducted into the Wyoming Cowboy Hall of Fame in 2016. To most folks in around the area, Wild Horse Robbins and Desert Dust live on to roam the Red Desert and the history of the Cowboy State.

And to this day near the town of Wamsutter and the Man and Boy Buttes remains the wooden corrals and rock wall formations that Robbins used to capture the wild horses. Desert Dust also helped inspire the movement that began the passage of the Wild Horse Protection Act of 1959 and later the Wild and Free Roaming Horse and Burro Act of 1971.

Frank "Wild Horse" Robbins is the great-great-great uncle of Dakota Kuhns, who wrote this story.