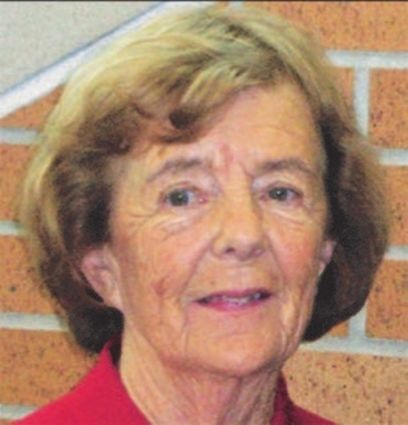 Josephine "Jo" Bourlier, 90, of Kimball, died at her home in Kimball on Thursday, January 10, 2019. Funeral services will be held at 10:00 a.m. on Saturday, January 19, 2019, at the Trinity United Methodist Church in Kimball with Pastor Roger Gillming officiating. Burial will be in the Kimball Cemetery. Visitation will be held from 1:00 until 6:00 p.m. on Friday at the Cantrell Funeral Home with the family present from 4:00 until 5:00 p.m. to greet friends.

Friends may visit http://www.cantrellfh.com to view Jo's Tribute Wall and leave stories and condolences for the family. In lieu of flowers, memorials may be given in her memory to either the Kimball Hospital Foundation or Trinity United Methodist Church. The services for Jo have been entrusted to the Cantrell Funeral Home.

Josephine Bourlier was born in Manchester, England, on February 8, 1928, to the union of William and Gertrude Tomkinson. She grew up in England during the German bombings in World War II, and had many fascinating stories of air raid adventures and growing up in war-torn England.

She married Arthur "Lee" Bourlier in England and followed love across the globe. They moved to a small farm south of Bushnell, Nebraska, where they raised five children. Upon Lee's death in 1986, she moved to Kimball, Nebraska. Throughout her life she worked as mother, "Lunch Lady" at Mary Lynch School, and librarian at the Kimball Public Library. She also served as a Kimball Ambassador and volunteered for the Kimball Hospital Foundation. She was a member of the Tidy Ten Club, the Trinity United Methodist Church and various other organizations. She enjoyed knitting, gardening, friends and worrying about her kids and grandkids!

She was preceded in death by her parents, husband and 3 sisters.