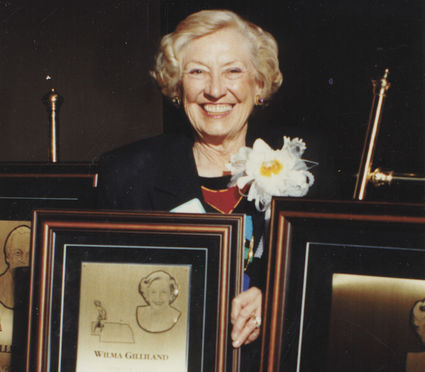 Wilma Gilliland's golf fame stretched far beyond the borders of Kimball and Nebraska. She was active in golf nationally and won many honors.

When you mention "Wilma" to anyone in Kimball, a last name is not needed – at least to anyone who has lived here for any period of time or anyone who is associated with the game of golf.

Kimball's Wilma Gilliland was honored one more time, and I won't say "one last time," this past Friday morning at the Cantrell Funeral Home by those who attended the funeral of this very special 94 year old.

Steve Gilliland, the son of the late Bruce Gilliland, did a remarkable job of providing those in attendance with a history of his mother's life from early childhood right to her final days. He touched on the "spunkiness" of his mom. Dating back to her elementary school days when she attended a small country school, and on some days was the only student!

I have written about the many tournaments that Wilma won during her playing career, mostly on a local level, but also at times when she was winning or involved in administrative levels on the state and national stages.

Wilma's golfing life began when she met Bruce way back in 1943 in Salem, Illinois ... on a tennis court! They were married in 1944, and Steve was born in 1949. They moved to Kimball in 1951 as Bruce followed the oil boom. Steve told us all at her funeral that his mom did not want to move to Kimball, but we are sure glad she did, and we are fortunate she came to love our town and the state of Nebraska.

After Bruce took her to a driving range the first time, she became obsessed with the game and within a matter of weeks she entered a tournament – and won! In 1957, she won her first Nebraska State Sand Greens Championship. She won again in 1958, 1959, 1961, 1962 and 1963. Whenever anyone won three times in a row, they got to keep the gold putters awarded to the champions by the Omaha World Herald.

Wilma's fame stretched far beyond the borders of Kimball and the state of Nebraska. The USGA selected Wilma to head the committee, and she played in the TRANS from 1961 to 1971 and then held offices, including president, for many years. I could give you all the many years of offices she held, and all of the various state and national positions she held, but I am going to stick more with what she did, and meant to us here in good ol' Western Nebraska.

Wilma not only loved golf, but she loved children, and loved introducing them to the game of golf. She formed and directed the Four Winds Junior Golf program and instructed hundreds or thousands of kids.

She had Bruce build a practice area where kids, and adults, if the kids were not using it, could play and practice free of charge. She had Bruce build her a gazebo where she could hold picnics and presentations of awards at the conclusion of a summer of junior golf.

She gave out scholarships, and many medals and ribbons. She made sure kids had golf clubs and rides to the golf course.

She had that little yellow golf car that was unmistakeable, and she buzzed it around the course checking on her kids, and also when she was head of the rules for high school and other tournaments – including state tournaments that she managed to bring to the Four Winds Course that her hubby built starting way back in 1966.

You could also see her big Lincoln sedan going back and forth from town to the course, and that same Lincoln took her all over the United States as she covered her many appointed golfing duties on the state and national levels.

I enjoyed reading what other golfing folks wrote about her in a book that Steve shared with me this week as she retired from her post as the Trans Annual Editor after 46 years of service. This was in July of 2017! This lady was loved by everyone, even if they crossed her at some time during some golfing event. Pages and pages of salutes to our Wilma.

I will share one incident I observed as I was covering a local tournament where Wilma was the rules official. She was called to make a ruling concerning an unplayable ball and the golfer asked if he could use his driver to establish the distance for a drop.

I had to run away to keep from laughing at her response. The young man did not choose his driver.

As I said at the beginning of this article, this probably won't be the last time good things are written about Wilma Gilliland because there are just so many things she has done that need to be talked about and written about.