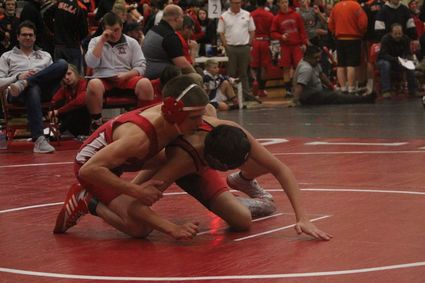 The Kimball High Wrestling Team competed in the Sidney/Bridgeport Tournament hosted by Sidney this past Saturday and had 3 of their 6 wrestlers finish 4th to earnmedals.From the 18 team field, Kimball finished 12th with 62 points, a pretty good number considering they had only the 6 wrestlers.

Connor Cluff, Izaak Rohde, and Stephen Bateman were the 3 wrestlers earning medals for the Longhorns.Cluff, wrestling at 126 pounds, was 2 and 2 on the day, with 1 pin and 1 decision to his favor and suffered a loss by a 2-1 decision in the semi finals and lost a 9-3 decision for 3rd place. Rohde at 195 was also 2-2 on the day registering a pin and a 9-6 decision before losing by fall and a technical fall.Bateman at 285 was also 2-2 with a win b fall and a win by decision before suffering 2 losses by fall.

Coach Wade Brashear had good things to say about his wrestlers for their performances at this highly respected tournament."We finished with 3 fourth place finishes from Connor Cluff, Izaak Rohde, and Stephen Bateman and they all three wrestled very well.The way the tournament was structured, only semi finalists could compete for 3rd and 4th.Jordan Cluff, who lost a quarter final match, and finished 4-1 on the day, but was only able to place 5th.Toby McManigal was 2-2 and just missed placing and is showing great improvement.Overall, we wrestled very well in the first round, but we need to make strides in order to compete better in the semi-final and placing matches" Brashear said.

The Longhorns also wrestled this past Tuesday against Chase County and Hershey in a triangular at Imperial and are now idle until January 5th hen they travel to Oshkosh for the Garden County Tournament.