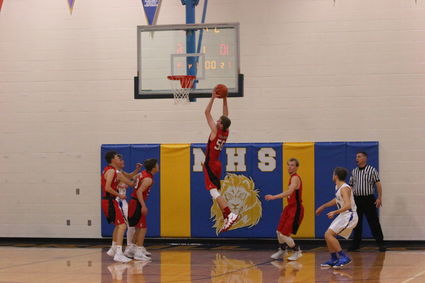 A loss and a win over the weekend leaves the Kimball High boys with a record of 2 and 2 in the early part of their basketball season, but things should be looking up for the Horns.

On Friday night on the home court the Horns led through 3 quarters over visiting Perkins County before faltering down the stretch in the 4th period to suffer a 55-47 loss to the Plainsmen.It was a case, once again, of poor shooting costing the Horns as they took 17 more shots from the field than the Grant club, but shot 15/57 for 33percent while the winners were 18/40 for 45percent.At the foul line Kimball was 6/13 for 45 percent and Perkins County shot 15/19 for 79 percent.There lies your difference!

Kimball held a 9-8 lead at the 1st quarter break as Jaren Winstrom hit a rebound put-back at the end of the period.It was nice to see a healthy Beau Hanks back in the lineup after missing a game in the opening week, but after scoring 6 points early, he picked up his 3rd foul and had to do some bench time.The Horns increased their lead to 22-17 by half time out scoring their opponents 13-9 in 2nd quarter play.

Senior Izaac Reuter had a big 3rd quarter for Kimball scoring 9 points in that time frame, but Hanks was called for his 4th foul with 5:18 showing on the clock in the 3rd period and once again had to sit out.The Plainsmen closed the gap to trail 34-32 going into the final period.Grant tied the game at 37-37 with 5:39 to play and took their first lead with 4:57 left.While Kimball missed some valuable shots at the foul line in the closing minutes, Perkins County converted several of their charity shots to secure the win.

Spencer Ross led the winners with 27 points hitting a pair of treys and going 9/12 at the line.Alex Patrick was in double figures with 11, Aaron Fay had 9, Alex Poppe 6, and Tristan Hite 2.

Izaac Reuter led Kimball with 24 points including 3 treys and 5/9 foul shooting.He also was top rebounder with 7 and led in steals with 7.A good showing by the 6'2" senior.Beau Hanks ended with 9 pioints despite limited court tie with his foul problems and charted 6 rebounds.Brayden Tyan had 8 points, Jaren Winstrom 4, and Brady Kilgore 2.

The 46-38 win at Morrill was big for the Kimball boys as they avenged an earlier loss to the Lions at the Kimball Tournament when they were defeated 46-39.The difference once again in large part was shooting and it was a good night for the Horns as they were 50 percent from the field on 19/38 shooting including 3/9 from 3 point land, but the foul shooting was once again way below where they need to be as they were 5/18 for a meager 28 percent.Morrill was 13.49 from the field for 27 percent and 5/12 at the line for 42 percent.

Beau Hanks did not play in that first encounter with Morrill as he was home sick.He was full steam ahead this time and what a difference his presence made. Down the stretch in the closing minutes, when the home town boys were trying to make a charge, Beau made big play after big play with his rebounds and grabbing loose balls, and playing tough defense.He ended with 11 points but had a double-double with his team high 12 rebounds including 5 offensive, had 2 blocks, 3 steals and 1 assist .Izaac Reuter also had 11 points with 1 trey. Brady Kilgore had 10 points with 1 trey, Brayden Tyan had 6 points and led the team in assists with 4, Jaren Winstrom hit both shots he took including a trey for 5 points, and Zane Anthony had 3 points along with 6 rebounds and a team high 4 steals.Kilgore was 4/5 from the field for 80 percent and both Reuter and Hanks shot 50 percent from the field. It was the best night shooting for coach Luke Dea's crew for certain, and it was gratifying to see them with a strong finish to win, something they have had problems with.

Coach Dea was happy with the way his team played at Morrill, the way they shot, and with the way they payed defense and finished strong. "I am glad we played the way we did and with getting the win. That being said, our schedule will get tougher now with the games we have coming up and we are going to have to step it up even more," Dea said.

A positive is the return of several players who have had to sit out the first 4 games for disciplinary reasons and they will be eligible for play this weekend as Kimball is at home Friday night hosting Hershey and Saturday night with Bayard coming to town. Boys JV game time Friday is 3:30 with the varsity game at 6:30. Saturday tentative game times are 2 and 5 for the boys.