A break even season for Kimball Football 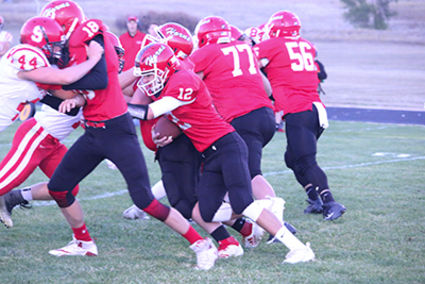 Kimball senior Izaac Reuter runs the ball during a game against Sutherland earlier this season.

After a winless season in 2017, the Kimball High football team ushered into a new era of 8-man football with a break-even season going 4 wins and 4 losses in 2018.

The Horns came close to going 5-3 losing their season opener 36-30 in overtime to Garden County. They got that long awaited first win in their second time out winning over Southwest 24-6, then lost 24-66 at Dundy County, lost 20-46 to Hemingford, won big 60-42 over Perkins County on Homecoming night, won 76-14 at Morrill, lost 26-44 to Sutherland, and closing out the season at Bayard with an exciting 46-42 victory. A good turn ar...