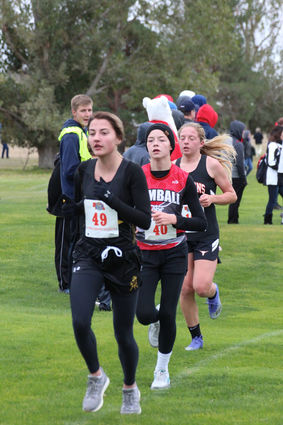 "I used to run on the track when I was younger and I really liked it," she said.

She recently completed her first year of high school cross country having achieved both of the goals she set for herself.

Chantel ran in junior high, preparing to compete at the high school level. As a freshman she wanted to break the freshman record, and at the WTC meet on Oct. 5 she did, also earning the third top spot overall.

She had hoped to reach her goals earlier in the season.

"It took a lot of the season, because I didn't run as much this summer," she explained. "I would condition more (if I had to do it over again). I also wanted to make it to state this year, that was my second goal. So I was really happy after that."

We met just days after her return from the Nebraska State Cross Country contest in Kearney, and Chantel said she was not prepared for the tough course.

The state meet, at Kearney, was a hilly course that Chantel said she was not prepared for.

"There were a lot more hills there, and we aren't used to that. This summer I'll be doing intervals on bigger hills," she said.

Running isn't just fun for Chantel, she uses it as a time to reflect and even work things out in her mind.

Though it is more of a singular sport, Chantel is competitive in nature so she continues striving to do better, beat her previous bests and she encourages her teammates to do the same along the way.

"I wish there were more girls on the girls team," she said. Many of her female classmates play volleyball instead.

She has already set goals for her next cross country season.

"I want to beat every grade record and have the overall record for high school," she said.

Chantel shared some advice for those considering the sport.

"Give it your best and don't worry about what anyone else thinks about it," she said.

When she isn't running cross country, Chantel also competes in basketball and, during the track season, she is a sprinter. She said she enjoys both distance running and sprinting equally.

"This was Chantel's first time being on the state course. She was surprised by how hilly this course is. She finished 47th out of 144 and her time was 22:14. She ran a great race for the first time being on that course," coach Tiffany Johnson said. "Chantel had a wonderful year taking the top freshman spot and the third overall spot with a 21:32. We look forward to having her back next year and seeing what the future holds for her."