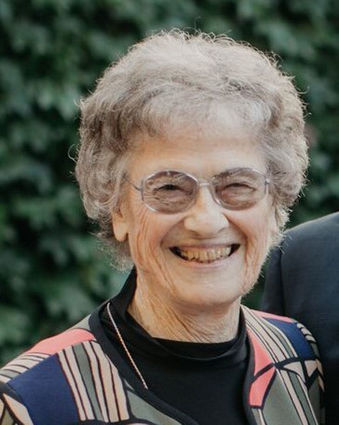 Peggy Nelson, age 91, of Gering, NE and former longtime resident of Potter, NE passed away on October 14, 2018. Funeral services will be held at 10:30 A.M., Saturday, October 27th in the Prairie West Church in Potter with Paster Betsy Galloway-Carew officiating. Burial will follow in the Potter Cemetery. Friends may stop at the Gehrig-Stitt Chapel on Friday, October 26th from 1-7:00 P.M In lieu of flowers, memorial contributions can be made to the Potter Historical Foundation. A memorial service will be held at the Northfield Retirement Communities, 2100 Circle Drive, Scottsbluff, NE on October 28th at 3:00 P.M. You may view Peggy's Book of Memories, leave condolences, photos and stories at http://www.gehrigstittchapel.com. Gehrig-Stitt Chapel & Cremation Service, LLC is in charge of Peggy's care and funeral arrangements.

Peggy was born south of Sunol, Nebraska to Richard and Ella (Schimka) Fraass and graduated from Sunol High School. She attended Kearney State Teacher's College. She met her husband, Harvey Nelson in 1946 and after two years of courting, they were married on September 18, 1948, in Sidney, NE. They lived in Potter for a short time before moving to the country in 1959 where they farmed, ranched and raised their family. Peggy dedicated a great amount of time volunteering in the Potter community. She was involved with Potter Community Improvement, Jolly Neighbor's Club, and in numerous other community organizations.

She was very active with her church and really energized by, and proud of her leadership roles in Lutheran Church Women. Recently, Peggy was honored at the Cheyenne County Family and Community Education Achievement for her 60 years of service to the community. In September, she received the Jay Stecher Community Service Award for her dedicated service to the Potter Community. During her time in Gering, she served on the Northfield Villa Board of Directors for numerous years, only just resigning from her role in April.

Peggy took great pride in her and Harvey's family heritage. During this last year, she was the key individual in organizing a screening for the Potter community of a Danish documentary, which features Little Denmark south of Potter and includes the Nelson family homestead on the land she and Harvey farmed. Peggy thoroughly enjoyed a good game of Scrabble, made a one-of-a-kind sugar cookie that no one could resist, and loved being surrounded by all of her family.

Peggy was preceded in death by her husband Harvey, eldest daughter Marcia Miller, one infant daughter, and one brother David Fraass.