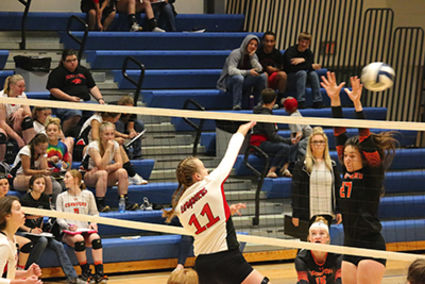 Kate Reader hits one over the net and right past a Hemingford defender during the Gordon-Rushville triangular.

The Lady Longhorns started their 2018 season in a triangular with Hemingford and Gordon-Rushville on Aug. 23.

The Kimball volleyballers took the first set against Hemingford 25-16 before losing the next two sets with a narrow margin, 25-22 and 25-21.

Though Coach Jeri Ferguson prefers the girls not concentrate on their personal stats, the unofficial stats taken during the games put Madison Wynne high on the game with nine points against Hemingford, including two ace serves, followed by Sydney Biesecker with seven points and one ace.