A two-win week for Payton Wise 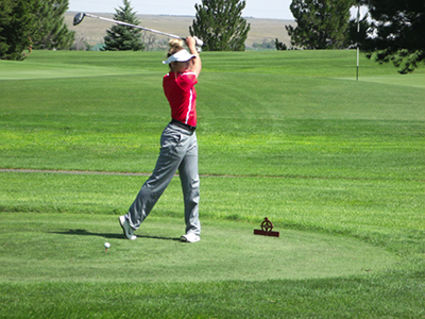 Sophomore Sam Bemis is a newcomer to the spot of golfer this year but is showing lots of promise with her long game especially. The all around talented Kimball High athlete shows off her form and follow through on this practice swing during play in the Kimball Invitational Tournament.

These two stories were intended to run in last week's Observer Sports.

These stories were inadvertently left out of print last week, though they did appear on the website.

A break-out week for Kimball High freshman Payton Wise as she picked up the first place gold medals in both tournaments the Kimball girl's golf team was involved in this past week.

Wise finished first at the Kimball Invitational tying the school record with her first round of 82, and then captured the medalist honors again at the Creek Valley Tournament held at Chappell with her round of 86. Her efforts...