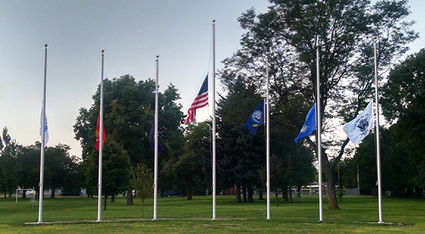 Flags fly at the new veteran's memorial in Kimball's Gotte Park following the dedication ceremony on Monday, Aug. 27, though they will remain at half-staff until the late Senator John McCain III is buried. Turn to page 8 for more photos.

Flags fly high at Kimball's Gotte Park with the completion of phase one of the Veteran's Memorial, a project two years in the making.

On Monday, Aug. 27, citizens gathered with community leaders, local scouts, and representatives from Francis E. Warren Air Force Base of Cheyenne, Wyo., as well as Carol Brehm, a representative of ACE (Alliance for Community Energy).

Nearly $8,000 in ACE returns were used to complete the first phase of this project, which include ground breaking, a concrete base, one 30 foot flag pole and six 25 foot poles as well as the flags that now grace the park.