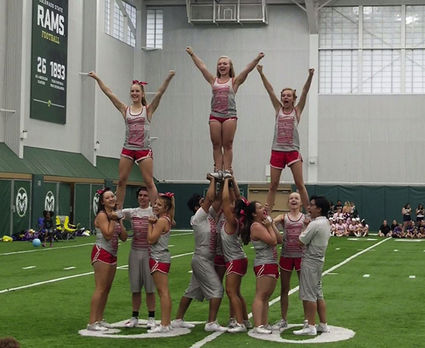 Kimball High School Cheer team received a Superior trophy for their tremendous skill and attitude while competing against more than 200 cheerleaders at a camp, held in Fort Collins, Colo., last week.

According to head coach Tiffani Dea, positive attitudes are not uncommon in this team, as all the teammates smile often and will support one another through both physical and mental challenges.

The current team has been together just since the end of last school year, having completed tryouts in the final quarter of the year.

"Since tryouts, this team has accomplished amazing things," Dea said. "Their skills have improved tremendously and they are really working as a team."

The team already has many accomplishments, big and small, from the first time the newcomers lifted a teammate into the air, to the big wins at their recent camp.

In addition to their team trophy, two Kimball cheerleaders, junior Alexander Flores and senior Kiersten Anderson, achieved the All American Cheerleaders award. These cheerleaders, Alexander in his first year of cheer and Kiersten in her fourth, were required to perform a cheer, jump and either a dance or co-ed stunt in front of all those at camp.

Camp provided attendees the opportunity to showcase their talents, as well as, learn new dances and stunts.

According to Dea, times get hard, especially at camps like this, but she said, "They had amazing attitudes even when things got tough! The team worked really hard."

Coaches were very proud of the team's work and thought it was time for a break after camp, so the team walked to Cold Stone Creamery where they enjoyed their cold snacks and camaraderie.

Though Kimball's cheer team is filled with many new members, this bonding time has each of them excited for the coming season.

"I am really looking forward to seeing their continued growth this year," Dea added. "I can't wait to see what they accomplish during our competition season."