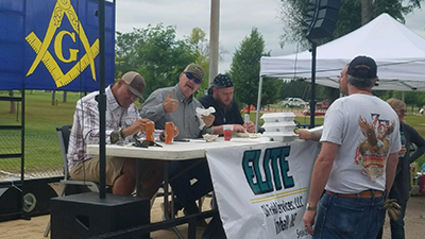 Throughout the past, the "Ribs n' More" cook off took place in June, donating the proceeds to a local organization.

After Jowain Sherman passed the cherished baton to the James L. Eatmon Masonic Lodge this year, the Lincoln Highway BBQ Fest took its first form last Saturday at Gotte Park in Kimball. Teams set up camp early Friday evening with campers and smokers and were ready to get cookin'.

Even with Mother Nature getting slightly in the way of the afternoon, teams kept the smiles on the judges faces and Beer and Loathing kept cold beverages in their hands.

Five categories made up this cook-off including; Beans, Chicken, Ribs, Pork Butt and Brisket.

The second contest was Chicken.Taking the win in this category was Eddy BBQ, second went to Bearded Bastard BBQ and third place was a tie between Smoken Iron and #2 BBQ, with Smokin' Yottee BBQ taking fifth.

Ribs came next, and boy, were the judges ready for some more food! #2 BBQ took first place followed by Eddy BBQ taking second, and Bearded Bastard BBQ in third. Smokin' Yottee BBQ came in fourth and Smoken Iron in fifth.

As if that's not enough meat to make your mouth water, the final contest was Brisket. Smokin' Yottee BBQ came out on top in the final contest with Bearded Bastard BBQ and Eddy BBQ in a tie for second place, #2 BBQ ended up in fourth and Smoken Iron in fifth. 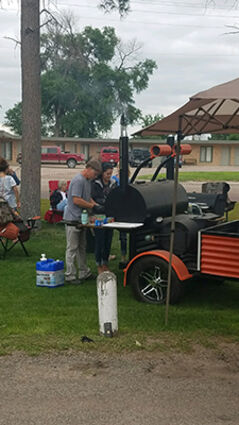 "It was a low turn out but the weather wasn't great. Everyone I talked to had a great time, even with the downpour," he added.

According to Wynne, proceeds from the event will benefit the Masons and the Kimball/Banner County 4-H Council.