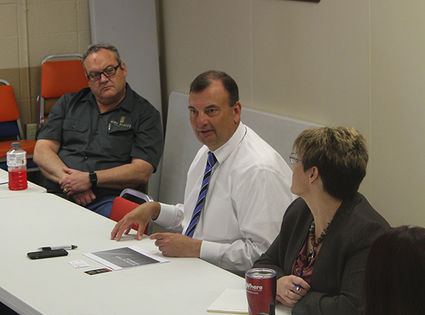 Brian Slone, center, talks with community leaders last week at City Hall. Slone hopes to focus on growth in Western Nebraska during his term with the Nebraska State Chamber of Commerce.

Throughout the years, Nebraska State Chamber President Brian Slone has always known Nebraska as home. Growing up in the small towns of Western Nebraska, Gordon and Gering, Slone has been close to the small community aspect of life.

Graduating from Gering High School, Slone attended college at the the University of Nebraska, at a young 29 years old Slone worked in Washington D.C., where he was legal advisor to the IRS Commissioner and served as a House Ways and Means Committee staff member under former U.S. Rep. Hal Daub, helping shape the 1986 Tax Reform Act under President Ronald Reagan....