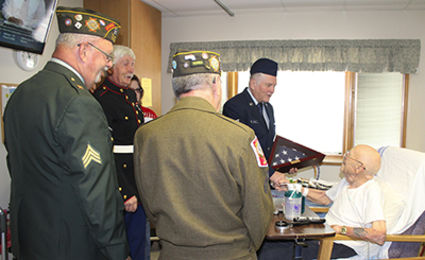 Walt Wann, far right, was shown a flag similar to that which he would be presented with at the 2018 Memorial Day Ceremony in Kimball. Wann, a WWII Veteran, passed away just days before he could be publicly honored. Shown above, members of the VFW Post #2243 and VSO Bob Jenner with Wann.

One of his first jobs as an adult paid him $5 each week and the second job was even better. He was saving for a 1936 Chevrolet with a rumble seat, but he never saved quite enough.

"I carried home $47 a week, that was a lot of money," he said. "I was looking for an excuse to go somewhere and I knew I would end up being drafted anyway."

Instead, in 1943, Walt Wann volunteered for the United States Navy in Elbert County, Colorado. He attended basic training in Idaho and eventually landed in the repair unit.

"We had to apply for jobs, you know, so me and another guy got one in the beer hall,"...