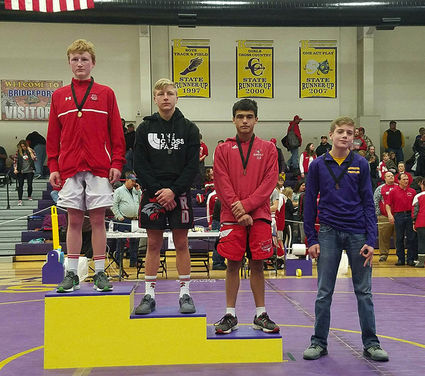 Kimball's Jordan Cluff (3rd from the left) on the medal stand at the C-4 District Wrestling Tournament held in Bridgeport. The Longhorn junior was Kimball's lone state qualifier after placing 3rd at 113 pounds. State action begins in Omaha today (Thursday) and continues through Saturday.

Jordan Cluff is headed to Omaha and the 2018 Nebraska State Wrestling Tournament! The Kimball High junior earned his spot in this year's state tournament by finishing 3rd in the C-4 District tournament held at Bridgeport this past week. He earned his medal and qualifying spot in the 113 pound weight class. This will be his first trip to state competition.

Jordan had 1 bye, won 3 matches and lost only 1 in district action. In the quarter finals, he pinned Edwards of Loomis-Bertrand in 1:51, lost 16-7 to Rowse of Ord in the semi-finals, won 13-8 over Battershaw of Valentine in the consola...