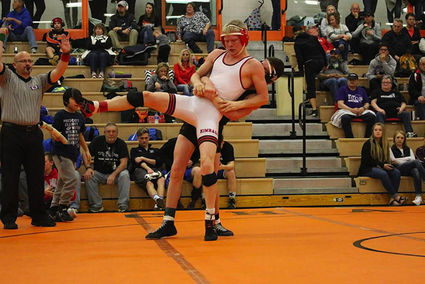 Jaden Mohr struggles against an opponent at an earlier wrestling meet.

The Kimball High Wrestling Team had a strong showing at Saturday's Dogger Invite in Lingle with all five of their wrestlers earning places.

The Cluff brothers had to battle it out for the top spot at 113 pounds with junior Jordan Cluff winning 11-8 over freshman brother Connor. Jordan was Kimball's lone champion on the day winning all three of his matches and is now 19-8 on the season. Connor had a bye, won two matches by pin, and lost in the title match to brother Jordan. His season record is now 7-16.

Jaden Mohr at 132 finished fifth but may have had the toughest bracket. He drew a bye,...