Garrett Pedersen has winning week on the mats for Longhorns 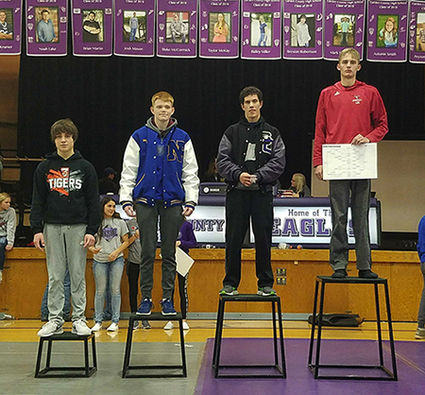 Garrett Pedersen took top honors at the Garden County meet this past week. Pedersen is on the far right.

Garrett Pedersen had a solid week of wrestling for the Kimball High Wrestling Team, winning top honors at both the Western Trails Conference tournament and the Garden County Invitational.

The lanky senior wrestling at 120 pounds won his honors at WTC finishing third overall with losses to Sidney Wrestlers, but since Sidney was an add-on team, he defeated all of his actual WTC opponents, which gave him first and also giving him All Conference Honors as well. At WTC, he suffered two losses buy fall to Sidney wrestlers, but also won by fall to a Sidney wrestler and pinned Kildow of Bayard in :...