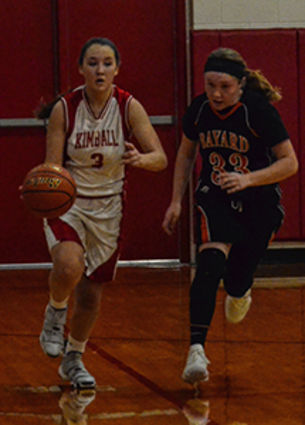 Kimball's junior high girl's basketball team closed out their 2017 early in December. They young ladies had a great season, according to coaches, and will look forward to playing high school sports in the upcoming school year.

The Kimball Junior High Girls basketball team had a busy final week closing out 2017 early in December with three games to finish out the season. The seventh graders finished their season with a 4-5 record, topping Bayard on Monday, Dec. 4 with a final score of 12-6. Lilly Tabor scored two, as did Jaydin Paxton, Kaitlin Van Pelt, Halsey Clark, Charlotte Hargreaves and Alyssa Paxton. The young team followed up with a loss to Mitchell, 14-20, on Thursday, Dec. 7, with Alyssa Paxton leading on the boards with five points, followed by Halsey Clark with four, Jaydin Paxton, three and Emma Patter...