Longhorns lose at Hershey...win at Bayard 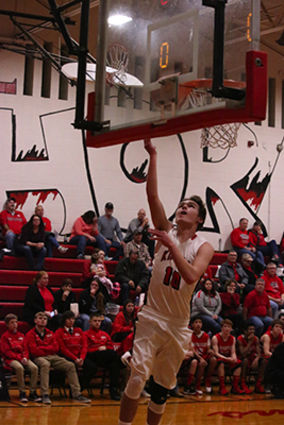 Isaac Reuter goes up for a shot earlier this season. Reuter led the Horns in points against Hershey and Bayard this past week. Reuter, scoring eight, was bested only by teammate Brady Kilgore, with nine points, in the game against Hershey and doubled his scoring against Bayard, with 16 points.

The Kimball High boy's suffered a loss at Hershey on Friday evening, but regrouped in big fashion to win at Bayard on Saturday, leaving their season record even at 3-3 at the Christmas break.

The Longhorns held their own early at Hershey with the score tied at 11-11 at the end of the 1st quarter, but the Panthers broke away in the second period to outscore Kimball 16-6, taking a half-time lead of 27-17 and expanded their margin even more in the second half play to win out 55-30.

No one in double figure scoring for the Horns with Brady Kilgore high with 9 points. Isaac Reuter ended up with...