Quarter Store a local mainstay for children of all ages 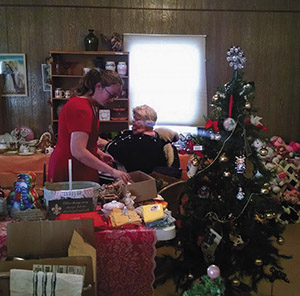 Laboray, seated, and Suda May organize items at the quarter store in Kimball.

In the eleventh year Kimball's Quarter Store continues to grow at St. Hilda's Episcopal Church in Kimball and hopes to expand to neighboring Pine Bluffs, Wyo., next year.

"When we started it was a dream I had been given," Jeanne Laboray, store organizer said. "I had a vision of this shop with everything for a quarter. I mentioned it to some other people and they thought it was a grand idea - a shop stocked by all of the stuff that we have too much of in our house."

It started much the same way it continues today, with donations from citizens. Donations come in the form of gifts, money and even a building in which to run the store.

Funds raised at the Quarter Store, currently expected to be nearly $1,000 this year, are used to help citizens struggling to pay rent, utilities and even travel expenses in some cases.

Just as it was in the beginning, the Quarter Store opens immediately following Kimball's annual Parade of Lights, and for the first two weeks, is available solely for children.

"Those first two weeks is children only and after that anyone can buy," Jeanne said. "Kids get first draw. One of the things we do with the kids is that I make a point to spend time with any kid that doesn't understand the meaning of Christmas. This is not a store where you buy something for yourself, it is a store where they can come to buy something for someone else. The kids are very responsive to hearing that."

Additionally, children, and eventually adults, can draw a ticket for door prizes from the unique boutique.

This year door prizes include art by a well-known photographer, a framed canvas from a local artist, fancy candles and kitchen accessories.

Jeanne and all of the Quarter Store volunteers invite the public to come shopping, keeping your quarters local and helping others out at the same time.

Jeanne works with countless volunteers from all the churches and throughout the community. Additionally, when items need to be moved into the Quarter Store from storage each year, the United Methodist Women's husbands are "volun-told" to help move it.

Though much has remained the same, changes are in store for the Quarter Store. Jeanne is handing over the reins to Manes next year and she will begin training anyone interested in Pine Bluffs for their own Quarter Store.

Jeanne accepts donations throughout the year and those donations are stored in Bushnell.

"People will call me or my friend Deb Manes," she said.