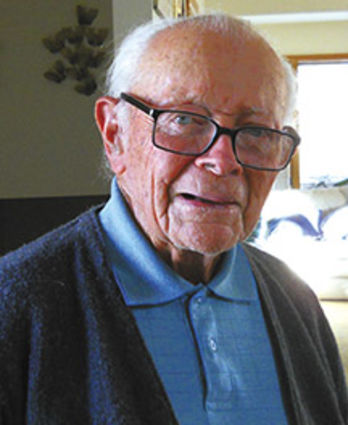 "Go west, young man" must have been ringing in the ears of Vincent Havorka (Vince). After graduating from high school in northeastern Nebraska, he made his way to California. It was late in 1940. He looked for jobs and found a good one with Lockheed Aircraft in Burbank, CA.

Vince liked his work there where he worked on assembling the P-38 and 414 Hudson Bombers. He developed some metal-smithing skills. He worked all shifts but preferred the overnight shift. After working there more than a year, things went well. He had a good place to live, found some entertainment, and had a better than average job. He was getting used to the late night shift (.90 cents an hour) and settling in.

The Japanese attack on Pearl Harbor changed so many things for so many people. Vince and a buddy knew the draft was coming near and they had to be on someone's list. Vince didn't care so much for the kind of life of Soldiers or Marines had to live.

Vince and a buddy decided to go to the Merchant Marine employment office in downtown Los Angeles, CA. When they got near the place of employment, there was quite a long, long line of young men seeking jobs. It seemed like every available guy wanted to work for them. Vince and his buddy went to an office in the basement of the nearby Post Office and found the Navy recruiter.

By December 1942, Vince was ordered back to the induction center. When he got there, they told him they couldn't find his papers. But since he was there, would he mind helping them with the paperwork? After working there for three days, his papers surfaced.

He wanted to be with the guys he signed up with but they were shipped to northern Idaho (Camp Farragut) for training. It's cold there in the winter – to say the least. Luckily, Vince was sent to San Diego and the Naval Recruit Training Center.

Now the haircut was at hand. Vince had a pretty good Hollywood haircut that he was sporting but that went away. He got a sea bag full of clothes. The men were taken to a barracks, taken to the mess hall, it's all good. Vince went to a secondary physical exam that was administered to all recruits in case the induction physicals might have missed something.

The optometric specialist checked Vince. He sent Vince on to the physician in charge. The Dr. said "I don't know how you got this far, but you have to promise me that you'll keep a spare pair of glasses with you at all times!" He was passed through.

Vince went through the eight weeks of boot camp learning all the essential skills. Vince was already an accomplished swimmer so passing the test in that area was not a problem. The ones who didn't pass the swim test had to stay on base but the swimmers got weekend liberty!

The next stop in Vince's training plan was shipping out to NATTC (Navy Air Technical Training Command) Norman, Oklahoma. His assignment was at the Aircraft Metal-smith School. Getting there was by troop train that went from San Diego east then down into Mexico, and back north to Texas. One of the train cars had an oblong livestock tank on its floor. The tank contained an inventory of cold beverages.

The school went for four months. On graduating from the course, Vince was promoted to Aviation Metalsmith 2nd Class. Because of his work at Lockheed earlier in his life, he was promoted faster!

Vince returned to the San Diego area, specifically to Naval Air Station, North Island, CA. Here, Vince applied his training and "know-how" to fix stuff. At NAS North Island, Aircraft carriers returned from duty in the Pacific and the War against the Japanese. Most of the fighter planes on the carriers had sustained damage to wings and/or fuselages. Vince's section repaired the bullet holes and other damage to make the planes air-worthy again. There was no shortage of work. Each carrier brought more banged up stuff.

When Vince got some liberty to leave his work, he returned to Randolph, NE. On two of his train trips, stops were made at the famous North Platte Canteen. Vince really enjoyed that.

Vince kept in touch with home by writing letters. He had been promoted in the later months. Following the bombing of the two cities in Japan, the War was over. Vince found out from Navy channels. Vince's work area had an immediate slow-down. He stayed on duty for a few months after the war. He got several opportunities to see USO shows.

When made available, Vince could out-process at San Pedro, CA. There was a destroyer sailing from NAS North Island to San Diego. Vince and about 150 other men got aboard. All was pretty sweet until the "tin can" destroyer hit some rough seas.

Vince and another sailor stood in the chow line. The other man – who Vince didn't know – told Vince to just load up on food, as it was really good. In the galley aboard a swaying ship, Vince got his tray and approached the line of food. A server began to put something on his tray, but Vince got the queasy feeling and turned over his tray and left the line.

Vince left the Navy and returned to Randolph, Nebraska. In time, he married. He also bought into a Ford dealership. Vince always liked cars. Owning a dealership meant that he was sometimes the mechanic, sometimes the salesman, sometimes the book-keeper. This investment lasted twenty years. He moved his family to Sidney, NE. Although he didn't plan to get back into the car business, he did! He and his family have been a significant part of the Sidney community for quite a number of years.

Aviation Metalsmith 1st Class Vince Havorka, your Country needed you at the time and you gave your all. Thanks for your service!