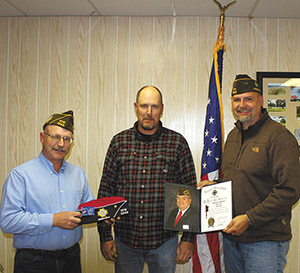 Kimball VFW leaders Brian Howard, Andy Bremer and Butch Nitz showcase the recognition received for the efforts made to rebuild and revitalize the local Veterans of Foreign War Post #2243.

"There was just a huge community effort headed by Andy (Bremer)," Liebsack said. "We came out here thinking we would find three or four new members, but it is now at 20 and growing."

Liebsack added that a post has a 1/1,000 chance of being named an All-American Post. Criteria for the recogni...