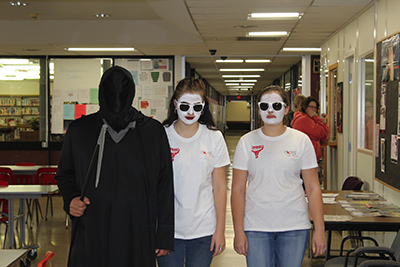 The Grim Reaper visited Kimball High School this last week to offer students a glimpse of the reality behind losing a classmate.

The day started off like any other. Then following the normal announcements, Kerry Ferguson, Director of Community Relations and Foundation at Kimball Health Services, announced the statistics of suicide and distracted driving.

"The leading killer of teenagers is automobile crashes. 133 teenagers die every week in traffic crashes," Ferguson said. "Suicide is the third leading cause of death in teenagers and for every suicide among young people, there are at least 100 suicide attempts. Half of these suicides among young people are related to bullying. Bully victims are between two and nine t...