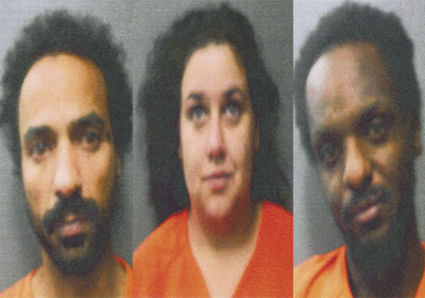 Davis, Beedy and Smith all arrested

According to the arrest affidavit, during the search of the residence, law enforcement officers located multiple items of contraband including a glass methamphetamine pipe, marijuana, a home made bong with residue, a small glass jar with wax substance (suspected to be Hash Wax), multiple marijuana pipes with residue, a broken glass pipe with residue, a self-sealing baggie with plastic cup containing white crystal residue, several clean, clear baggies that were of the same make as the one that had white crystal residue, and a glass bong in the south bedroom where Samantha Beedy and Joseph Davis were located.

Beedy, Davis and Smith were all placed under arrest for possession of a controlled substance-Methamphetamine. All three were transported to the Kimball County Jail by Deputy Marla Knigge and Kimball Police Chief Andy Bremer.