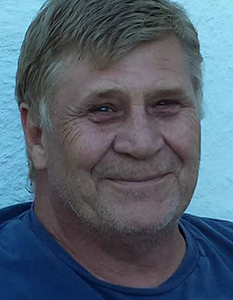 Roland Eugene Hendricks, 65, passed away in Scottsbluff, NE, on October 1, 2017, following a heroic battle with Cancer of Unknown Primary (CUP). A Candle Light Memorial will be held Friday, October 13, 5:00pm at Legion Park in Gering, NE. Friends and Family who cannot attend in person can watch on Facebook live by clicking on the link or searching for it (Roland's Candle Light Memorial). Memorials may be made to The Wounded Warrior Project. Online condolences may be left at http://www.jolliffefuneralhome.com.

Roland was born in Kimball, NE on December 19, 1951, the son of Roland Ernst and Evalyn Mary (Soule) Hendricks. He served in the Navy from '70-'74, during which time he met Deborah Louise Stanley. They married February 2, 1974. After his service, they returned to the Kimball/Scottsbluff/Gering area, where their five children were born (Melissa, Shawn, Matthew, Stacy, and Megan). His career working in electronics covered many years at Regional West Medical Center, owning his own business, Cable Tronics, and ending at Home Depot as Department Head of Electronics. He married Catherine H. Kroeker on March 5, 2004, in Torrington, WY, and became a loving father to her children.

Many of you will remember Roland as a cheerful sales associate, determined business owner, or as a humble technician and serviceman. Although, those who knew him best will remember a part-time comedian, stubborn outdoorsman, and kind soul with love for art and music.  But most importantly to Roland, he was a caring father and grandfather. Known to live within his means, he was often preoccupied with helping others and would use any opportunity to fulfill his sense of charity and comradeship - sometimes also a reason to show off his inventive mind. A man of faith, Roland valued community and compassion and was always willing to approach a stranger if he thought he had a chance to brighten up their day.  His unique character and sense of humor contributed to many memories that will be cherished and never forgotten by those whom Roland helped to "enjoy the sunrise".

He was preceded in death by his mother and father, and sisters Ruby Rae Jelks, Evalyn Marie McCall, and Agnes Joy Strecker, as well as three nephews Michael Strecker, Bill Jelks, and Doug McCall.