Kimball volleyball gets first win in busy week of play 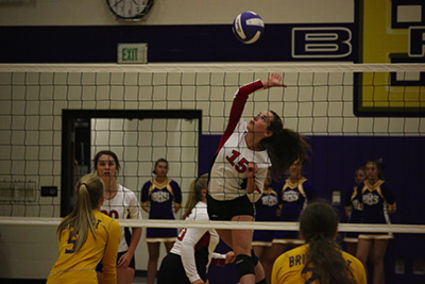 SMACK!! Justine Heeg sends a rocket over the net in the game against Bridgeport Saturday, September 9.

Two triangulars and a tournament last week provided a lot of action and tough competition for the Kimball volleyball program. The Lady Horns split the first triangular with one loss and one win at Bridgeport on Sept. 5 and followed up at home for two disappointing losses on Thursday, Sept. 7. The Horns were back at it just two days later for the Bridgeport tournament and came home in third place with three wins.

In the first game against host Bridgeport on Tuesday, Hannah Biesecker and teammate Kate Reader were each credited with four kills, followed by two each from Justine Heeg and Hailey...