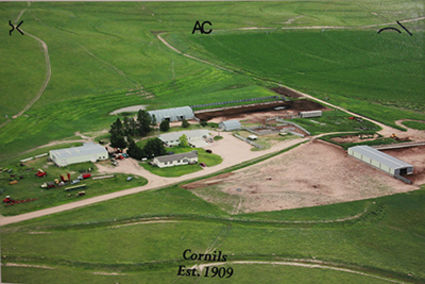 Cornils homestead 2009 - the family was recently recognized for achieving more than a full century on the farm.

Arthur Cornils emigrated to the United States in the late 1800s, along with four of his brothers, following the Franco-Prussian war.

His mother was a nurse during the war and she did not want her sons to fight in a war.

Arthur attended the University of Nebraska in Lincoln and graduated in 1906, according to his grandson, Clint Cornils of Bushnell.

Following his university graduation he taught at Centennial, Wyo., and then in the Hull Community school district before homesteading south of Bushnell in 1909.

"He came this far out because this was the only place that still had land to be homes...