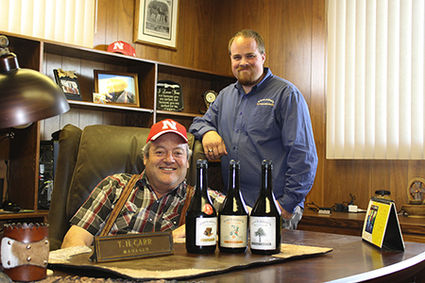 Tom, seated, and his son in law Scott prepared last week to debut Adelaide's Dreamsicle in local stores. The company recently moved into its new Kimball home from Colorado.

A new company moved into Kimball last week and the owner, Tom Carr, said bringing Carr Spirits to Kimball is a bit like coming home in more than one way.

Carr and his wife, Darcy, bought the Colorado Cattle Company in 2009, at a time when Tom was still working in the liquor industry. With the purchase of the ranch Tom quit the business and began ranching full time.

In March 2015 Tom began Carr Spirits with the purchase of a company that owned a brand called Fuegon.