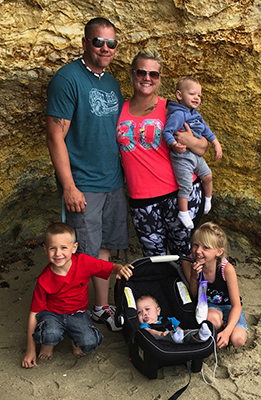 Jason with his wife, Jess (holding Kash), enjoyed their trip to California with Austin, front left, Karter, in the carrier, and Rylle, front right.

Born in 1985, Jason Hottell has spent his life in the Kimball area and graduated high school here.

"The best part of Kimball, and it could be the worst, is knowing everyone," he said.

Being a Deputy Sheriff takes up a lot of spare time, however Jason absolutely loves his job. He has been with the Kimball County Sheriff's Department since June of 2016 and he calls it his dream job.

But even his dream job is secondary to Jason's favorite position – dad.

He said he is the true definition of a family man, someone who works to keep his family fed and clothed, yet he can't wait to spend every moment that he is not at work with his family and the ones he loves.

Jason enjoys hunting, fishing, working with horses, and being outdoors, however he loves that he is able to enjoy doing all the things he loves with his family.

With four kids, he said, life can sometimes be hectic but he wouldn't have it any other way. Rylee, eight, and six-year-old Austin have twin brothers, Kash and Karter who are 13 months old.

Twin boys present a new set of parenting privileges for Jason and his wife, Jess, and Jason said he loves every minute of it.

"They are so different, one is so sweet and snugly and the other is ornery, hyper, and always laughing," he said.

Jason says his favorite part about having twins is that they are totally two different kids, with different personalities – really, it is the best of both worlds.

The Hottell's kicked off their summer taking a cross-country road trip, with all four kids, to California. The long trip was beautiful, according to Jason, who recommends a family vacation for all dads.

"Spend the money and time for a vacation your kids and the family will remember forever," he said. "During the straight through drive, the kids have gotten to see parts of Wyoming, Utah, Arizona, Nevada and of course the place they were all waiting for, California."

Once there, the whole family had fun hunting for seashells on the beach and visiting Sea World.

"This is Rylee's first time at the ocean, and she had a blast at the tide pools, where all the little critters wash up and hang out," he said.

"There is nothing more important then spending all the time I can with my family," he said. "You look at things differently, things that were important to you that aren't anymore when you become a parent."

On their return from vacation Jason will be back at work but his favorite job remains being Dad.

"I'm living the dream, being a parent and loving every minute of it!" he said.