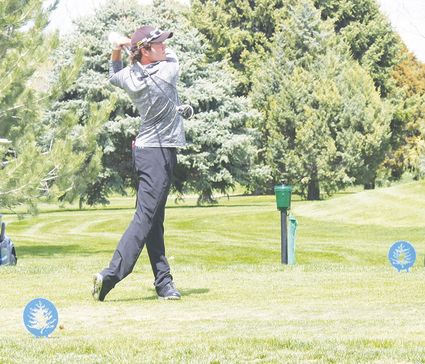 SPVA Conference golf champion is Jordan Greenwood who won a five hole playoff over sophomore teammate Zane Anthony after both Longhorn golfers shot even par 72 on the Sutherland Golf Course. Kimball remains undefeated in team competition shooting 308 to capture the SPVA Conference title. The Longhorns were in action at the District Tournament in Cambridge this past Tuesday.

The Kimball Boy's golf team captured the team title in winning the SPVA Conference championship in their latest conquest of an undefeated season to date. The Longhorns shot a solid round of 308 for the win with Perkins County runnerup with 324, followed by St. Pats with 330, Sutherland 379 and Hershey 386. The conference tournament was held on the Sutherland golf course.

The Horns also took the top two individual spots as well with Jordan Greenwood winning out over teammate, Zane Anthony, in a five hole playoff after both Kimball golfers shot even par, chipping in on the 4th hole of the p...