Greenwood has career best round 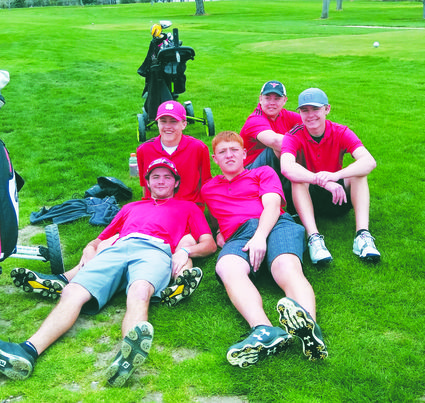 Time to relax after a hard, but fun, day on the golf course for the record setting Kimball High golf team. The Kimball team shot a new Kimball High School team record round of 298 in winning the Morrill Tournament last Tuesday, April 18. Laying in the front are Jordan Greenwood and Dillon Wise. Seated in back, left to right, are Zane Anthony, Andrew McCloud and Izaac Reuter. All five Kimball golfers finished in the top ten medal group with Greenwood winning individual honors with a career best 67 round.

The Kimball High boy's golf team had the best round ever while setting a new school record at the Morrill Tournament this past week. April 18 will go into the record books as the date the Kimball boys scored a team round of 298 to better the previous round of 302 shot a few years back by the team consisting of Kendall Ferguson, Jeff Greenwood, Henry Heeg, Landon Smith and Todd O'Hare.