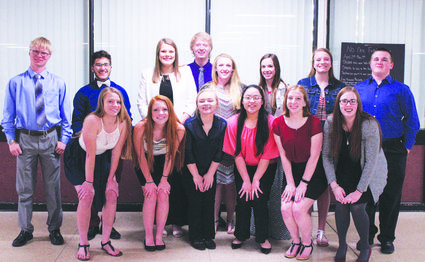 Six new members were inducted into the National Honor Society during Kimball's annual NHS Induction ceremony – a momentous occasion for four sophomores, one junior, and one senior.

Member Madison Wynne said, "It has been an honor to be inducted into NHS. I am very happy that I was nominated and being recognized for all of the hard work that we students have put in. I think it will be great for my upcoming future."

The ceremony began with Kimball senior Holly Clark leading attendees in the "Pledge of Allegiance", followed by Taylor Muldoon explaining the basics of the community. She described the meaning behind their colors (blue and gold) and their flower (yellow rose).

Audrey Day spoke about the importance of education, defined scholarship and illustrated how a select few have shown this in their life.

Nicholas Thomas-Lewis took control of leadership as he explained the crucial part of being a part of this group is to have the leadership skills. Leisa Casimro followed with the importance of character. Casimiro advocated a positive mindset and overall attitude as she said, character is essential not only in the NHS, but in everything one does.

Kennedy Lewis highlighted service and its value on all things.

Paycen Harroun introduced all the new members and each newly inducted member stated their grade and extra-curricular activities.

One by one, each new member was called back by Alex Reader to be congratulated with a certificate and yellow rose, given to them by Clark.

To hold the rose was an honor to many of the students and Clark said that it was her honor to give them to those few, knowing that they will make the world a bigger better place.

A reception followed and as NHS members mingled, the question was asked, "What does this mean for you?"

"It is a great honor to be in NHS because it shows hard work for sure and I think it will look great in college applications," Kate Reader summed it up, "My friends are in it, so I think it will be fun."