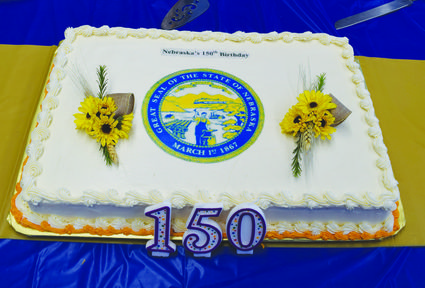 The 150th birthday of the State of Nebraska was celebrated in the district court room of the Kimball County court house on March 1. More than 100 people of all ages attended the celebration including a couple from Colorado who came to get their marriage license and stayed for the party because the groom is originally from Grand Island.

Although the Kimball County Commissioners requested the celebration, many of the court house employees worked together to make the afternoon affair both fun and educational. Cathy Sibal, Kimball County Clerk, was emcee for the celebration and kept the crowd's energy up with the Nebraska Cornhusker fight song, trivia questions and her cheerful attitude.

The Potter-Dix fourth graders were special guests, sharing Nebraska trivia and book reports on historical figures from our state. Before the cakes were cut, they sang their own version of Happy Birthday.

Deb Carpenter-Nolting played the guitar and sang a song she wrote for her grandmother that described how grandma's life had changed over the years, beginning as a Nebraska pioneer.

Everyone in attendance received a new Ulysses S. Grant $1 gold coin and several prizes were given away. The oldest Nebraska-born guest of the celebration, 99-year-old Martha Mossberg of Kimball, received a beautiful glass box; the engaged couple from Colorado traveled the furthest and received a gift, and local Jerry Robbins earned a prize as he and the state share the same birthday, although not the same year, of course, just to name a few.