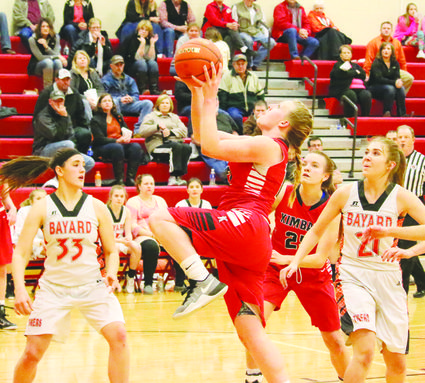 Kimball senior Jannel Fiehtner battles through Bayard defenders to put a shot up during the first round of sub-district play. The Lady Longhorns won their first round play and finished their season in the finals.

The Kimball Lady Longhorns saw their season come to an end with a loss in the finals of the C2-12 sub-district tournament this past week. After winning 63-34 over Bayard in first round play, the Kimball girls lost to Hemingford 63-32 in the title game, leaving them with a record of six wins and 14 losses on the season.

No problem in the win over Bayard as the Lady Horns jumped out to a 15-0 lead and was leading 18-2 at the quarter break. Kimball won the scoring battle each quarter of play en route to the win with nine girls getting into the scoring act, led by Kate Reader with 19 points. The talented young sophomore also charted seven rebounds, had one block and four steals. Alexis Lulf hit double figure scoring with 12, including a pair of treys and had five rebounds and four steals. Justine Heeg ended with nine points, and one trey. Jannel Fiehtner and Hannah Biesecker both had seven points and six and four rebounds respectively. Carli Wurdeman had four, Madison Wynne and Jenna Greenwood two each and Lacey Klinkhammer one.

Once again Kimball got an early lead against the Hemingford Lady Bobcats with Lulf scoring on a layin and Reader scoring inside, but Faith Rohrbouck went on a scoring spree for the Lady Cats tallying nine of her game high 23 points in the opening period as the Hemingford girls held a 17-8 lead at the quarter break, and were up 32-11 by half time. It was all Hemingford the second half as well, as the Kimball girls had way too many bad passes resulting in turnovers and baskets for the winners.

The Lady Horns showed some comeback spark in the third period as Lulf and Heeg both swished a pair of 3 pointers, but they were still out scored 21-14 in that time frame. Lulf led Kimball with 11 points including three treys, Reader ended with ten points, Heeg had six with her two treys and Wurdeman five with one trey as only four girls scored for Kimball.

Not a lot of good news to report in team stats as Kimball was 13/44 from the field going 6/19 on three pointers and only 0/2 at the line. They also had 19 rebounds, two blocked shots, eight steals, nine assists, 23 turnovers and 11 fouls.

Hemingford had three players in double figures led by Rohrbouck with her game high 23, Brooke Turek with 12 and Natalie Gasseling with 11. The Bobcats shot well, going 28/55 from the field for 51 percent, including 2/9 on treys, and were 5/8 at the line.

Coach Chauncey Pedersen was, of course, pleased with the play of this Kimball girls in the win over Bayard, but said, "We just lost our composure, for whatever reason, against Hemingford. We got out of control with our entire game and made it easy for Hemingford."

Once again he reflected on the loss of his leading scorer in Alex Reader, who suffered a season ending knee injury in the fourth game of the year after leading Kimball to a 3-0 start. While Hemingford will graduate eight seniors, Kimball loses only two, with Fiehtner and Lulf in the senior class, and Alex Reader will rejoin her team next season for her senior year.