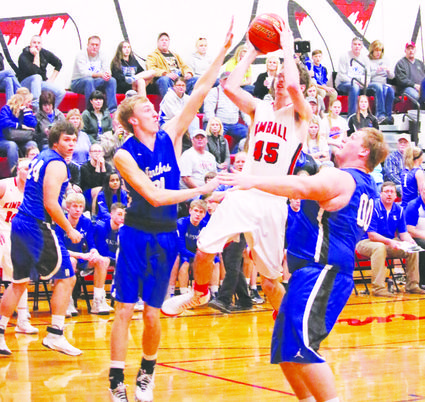 Kimball's Edward Barnes goes high in an attempt to shoot past two Hershey defenders last weekend. Barnes and his teammates struggled against a tall Hershey club and lost to the Panthers 73-44.

Two more losses over the weekend for the Kimball High Boy's Basketball Team. The Horns lost at Hemingford 55-34 on Friday, and fell to Hershey at home Saturday night 73-44. This leaves Kimball with a 12-8 record going into their final regular season contest Mitchell tomorrow (Friday) night.

At Hemingford, the Horns stayed close early scoring the final 6 points of the opening quarter to trail 10-9 at the end of the period. Kimball was taking lots of long 3 pointers, that were not falling, and by half time they were down 25-15, and had people in could trouble as well. The host club also won...