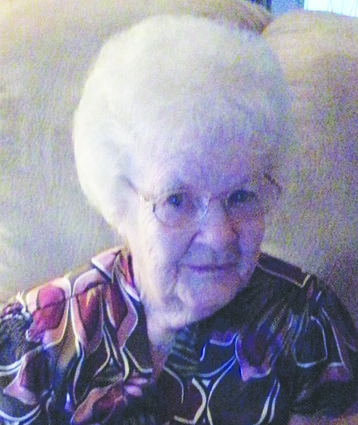 Barbara L. Swayze, 85, of Kimball, died at her home in Kimball on Monday, January 30, 2017. Funeral services were held at 10:00 a.m. on Saturday, February 4, 2017 at St. John's Lutheran Church in Kimball with Pastor Kenneth Mars officiating. Burial will be held in the Kimball Cemetery. Friends may call at the funeral home on Friday from 1:00 until 6:00 p.m. Friends may also visit http://www.cantrellfh.com to view Barbara's Tribute Wall and leave condolences and stories for the family. Memorials may be given to the family. The services for Barbara have been entrusted to the Cantrell Funeral Home.

Barbara Louise Swayze was born in Alliance, Nebraska on January 15, 1932, the daughter of Cleo and Ruth (Stewart) Thomas. She was raised in Scottsbluff and graduated from the Scottsbluff High School in 1950. She moved to Kimball and on December 16, 1950 she was married to Lenard Swayze in Scottsbluff. The family lived in Kimball and Barbara worked for many of the restaurants in town as a cook and waitress. The family moved to Sidney for a short time and then back to Kimball in 1954. Along with working at restaurants, she cleaned homes and later went to work for GRI on the assembly line. She retired in 2012. She was baptized into the Lutheran Faith on August 17, 1977 at Faith Lutheran Church in York, Nebraska. Barb loved doing crossword puzzles, listening to country music, and watching trivia game shows. Her favorite thing to do was traveling, and enjoyed many trips to see family and friends.