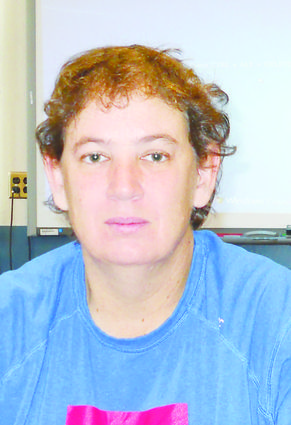 Having a Grandfather who was a Seabee in WWII - who was a Prisoner of War - and a father who served in the US Marine Corps, Karleta A. Wheat (Karla) wanted to serve her Country. At this stage in her life, she was 28 years old, a married woman and mother of two young girls. Her husband had served in an Army Reserve unit and understood her drive to serve.

Karla tested out just fine and learned that one of the critical personnel needs the Army had was in the field of postal service. There was an Army Reserve unit nearby in Oklahoma City. She could join the Army Reserve, drill on weekends, and still have her family. Plus, there was a very good enlistment bonus that could pay off her student loans. Perfect!

In not much time, she had passed the physical exam, the aptitude tests and boarded a plane for Fort Jackson, SC. Yes, she and others were kindly greeted by the new men and women wearing brown round hats or green hats folded kind of differently. The Drill Sergeants (male and female) provided lots of yelling, lots of cursing and letting the new people know exactly who was in charge! From the trainee's point of view, the usual question was: "what have I gotten myself into?"

Fort Jackson, SC is near Columbia. It is a beautiful post that trains new people in many subjects and does the training in a co-ed environment. Karla was a young lady from a farm. She was older than all of her peers, and could shoot.

She came into the Army training in awe of it all. In her mind, the Army provided everything. While in training, she got a letter every week from her Dad who told her about his efforts in USMC boot camp. She learned more about her Dad than ever before.

Recruits just had to do as they were told and things would work out. She participated in her first physical fitness test. Her boots were too big resulting in a low test score and hurting feet. The Drill Sergeants corrected that problem, took corrective action, and she was good to go.

Karla met all the challenges of the Initial Entry Training environment and actually enjoyed the work - especially the rifle shooting - which she earned the Expert Badge. She achieved membership on the Drill Team. At graduation, her husband and children were there to watch the ceremonies!

Going on to the Advanced Individual Training, she remained at Fort Jackson. The course of instruction was aimed at handling the mail for soldiers serving in the area of operations as assigned.

The training requirements were met and another graduation came about. Karla was all set to return to her unit in the Army Reserve.

The unit Karla was a member of performed the normal functions of the Army Reserve. The good part was their Annual Training assignments which always involved a trip to Germany. In her off time, Karla took advantage of every travel opportunity available - even to Hitler's famous bunker! Since one is there, taking advantage, seeing history and geography is essential!

On September 11, 2001, Karla, like the rest of us, watched as the planes flew into the Twin Towers and the Pentagon. Holy Crap! Karla kept a packed duffle bag and called her Reserve unit for instructions. Although her specific unit was not activated, she was ready!

By 2003, Karla had gone back to college and obtained a degree in biology and had a teaching certificate. Her life was going well! While teaching a class, she got a message that a phone call awaited.

The 841st Postal unit was called to active duty. As the activation order went out, Karla was ready. After saying goodbye to her husband and kids, she reported with the unit at Fort Sill, OK where they would train in tactics of warfare, obtain their medical shots, get new clothing, and get their mind prepared for what was ahead. In that the new uniforms were desert cammo pattern, the soldiers knew they were going to the Middle East. Soon, travel to the theater of war in Afghanistan was at hand.

The first plane carrying her unit landed at Baghram Air Force Base and from there, Karla flew on to Kabul, capitol of Afghanistan. Once the unit was situated and had assumed their assignment, the nature of the postal unit's duties was intense. Karla volunteered to go to Kabul.

On arrival, she noticed the destruction of buildings that happened as a result of the bombings and firefights. Another of her senses kicked in when she and others heard the reports of mortars, cannon fire, and small arms fire. Again: "what have I gotten myself into?" The fog of war had arrived.

The desire to be a soldier, to make a difference, to be all one could be, now was the time! Housing was found for Karla and her new best friend, a Marine. They located the dining facility and went to work. Some intense sickness attacked Karla. She had developed a high fever and had to be taken to a medical tent. The situation was likely mortal. Somehow, and with the right medication, she survived. Back to work!

Karla became a volunteer for every mission that was available. The good thing about the volunteering was that it helped pass the time away. Once the daily requirement of the postal unit was finished, she volunteered to drive a military vehicle for the Chaplain's Office.

She was part of a two vehicle convoy...in front was an SUV with armed soldiers. In the rear was Karla's vehicle with two un-armed Chaplains, As their vehicles approached a traffic circle, the units got tied up in a traffic jam. A local man had positioned himself between the front vehicle and Karla's vehicle. He faced her vehicle and began hammering on its' hood. As he yelled, he slammed his arms and fists. At the same time, the crowd started to rush her car from the side. Karla drew her 9mm pistol and aimed it at the crowd. Suddenly, an opening in the cars came about... now she was in a dilemma...move or stay there and die. She took the move option. She drove on, to better space and toward the mission. She said she never looked back. After this incident, even the Chaplains had to take a breather when they could!

This tempo looks like this... postal work in the morning; drive the Chaplains in the afternoon; rest; prepare for midnight and 0400 patrol operations. She became the female who would shoot.

Karla carried 260 rounds of ammunition for the weapons. She went out on humanitarian missions to the refugee camps and schools.

The 841st Postal would re-deploy to Fort Sill, OK. In less than three weeks she separated from her husband, things were going to be risky. Her young kids grew into teenagers. Home life as she knew it wasn't the same.

She got back into teaching, applying her degree in biology. The students who had been given everything to make them smarter, didn't seem to care much. Two colleagues were overheard trying to decide which color of shoes to wear for dress-down Friday. Karla left her class and went to the administrative office. She had seen schools had nothing, but students were engaged. There was a hunger for knowledge. She ended her teaching career. Karla needed help.

She applied for and received an appointment for reconciliation of her mental problems, she was assigned a therapist. His name was Mohammed. In a PTSD state, she demanded that she not be treated by anyone named Mohammed. She and her attitude were brushed off. Three police officers and a healthy shot of muscle-relaxant later, she was under control.

In the Veterans Affairs computers, she was labeled a hostile patient. She could get no help with that notation on her record.

Karla became homeless. She slept in her vehicle and grew to be addicted to adult beverages.

A retired Army Lieutenant Colonel walked the streets in Oklahoma City. He found Karla sleeping in her car. He suggested that she park her car in the driveway at his home. That way, he knew she would be safe. She complied. Soon, the Lieutenant Colonel found a residential rehabilitation treatment program at the VAMC in Cheyenne, WY. Karla is getting the help she needs now.

Specialist Karla Wheat, you are an amazing person! There are many, many people hoping you'll recover. Thank you for your selfless service!