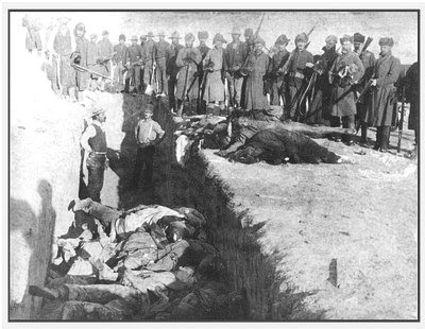 Mass grave at Wounded Knee (photo is in the public domain)

Sitting Bull, his son Crow Foot and fourteen other Sioux, had been killed in a botched attempt to arrest him on December 15, 1890. Stunned by his death and fearful of reprisal approximately 200 of his Hunkpapa band left the Standing Rock Reservation to join the Miniconjou Sioux at the Cheyenne River Reservation. The Miniconjou band was under the leadership of Chief Spotted Elk.

The attempted arrest was based on the false assumption that Sitting Bull was a leader and instigator of the recent Ghost Dance religion. The Ghost Dance was a ceremony performed by those who believed that the practic...