Runners were all A-Glow at inaugural KHS Glow Run 5K 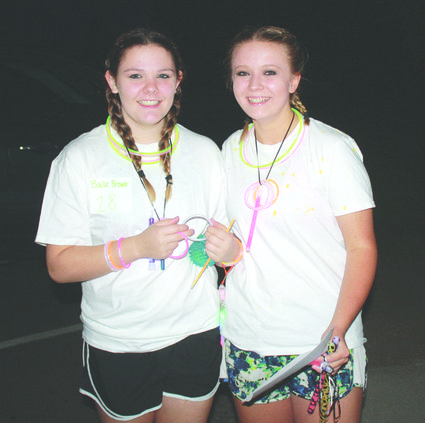 Bailie Brower, left, and Emma Martin "got their glow on" and are ready to run at the inaugural Kimball High School 5K Glow Run.

An unexpected turn out was welcomely received at the Kimball High volleyball Glow Run last Saturday evening. Nearly one hundred people ran and walked in the 5K event that started at the high school, looped around Elm street, back towards Gotte Park and then ended at the high school coming from the east on 8th Street.

Jeri Ferguson and her team worked hard marking the route with glow sticks and flourescent paint, organizing the seniors on ATV's to help light the way, working with the police to lead the runners and ambulance crew in case of emergencies.

Winners in the adult division was Ke...